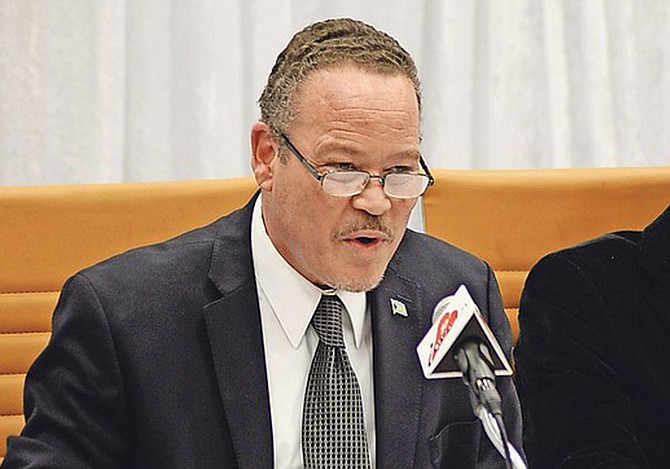 ATTORNEY General Carl Bethel yesterday warned that any illegality in the gaming industry will be “vigorously addressed” by the government as he moved to address recent statements by gaming house operators that appeared to resonate as a threat of moving “underground” to escape impending tax increases.

A study released by the Bahamas Gaming Operators Association warned 2,000 jobs will be lost, and 75 per cent of its locations will close, if the government follows through with its new sliding scale tax structure.

But it also projected the increases and their impact on the seven licensed web shop chains would drive 30 per cent of the industry’s existing customer base to an “underground black market.”

Yesterday, Mr Bethel said: “Any resort to ‘underground market’ resonates with a threat of illegality. Any illegality will be vigorously addressed by the government.

“It is hard to see the validity of any threatened legal action if the same is backed by the clients’ threat to resort to illegalities or ‘underground’ activities, if they are unable to demand and receive the fruits of their proposed litigation without actually going to court –- just because they threaten to go underground.

“Such threats are unacceptable and any such underground activities will be addressed, as indicated,” Mr Bethel said.

Mr Bethel was referring to the seven-day ultimatum issued by BGOA – which expired today and called for the government to negotiate with the association or face legal action.

Finance Minister Peter Turnquest did not respond to calls for comment on the BGOA report up to press time.

Yesterday, Labour Minister Dion Foulkes said about the layoff threats: “I don’t want to comment on it. The minister of finance has carriage over all matters connected to taxation. He has been in several conferences, meetings, dialogue with stakeholders, I do not want to interfere.

“But I want to say that the object of the government from the Ministry of Labour point of view is to maintain jobs. We would wish to maintain existing jobs and to create new jobs, that is what our policies are all about with respect to what’s going on with the gaming houses.”

‘Gun to the head’

The gaming industry’s projection of thousands of job losses and web shop closures due to tax hikes was yesterday described as an attempt to “hold a gun to the government’s head” by two senior Cabinet ministers.

Another Cabinet minister told The Tribune the “brash and arrogant” group had made it clear they held an irrational or inflated sense of entitlement and influence on the governance of the country.

The Tribune spoke to three other Cabinet ministers, who yesterday sounded off on the gaming industry’s report with the condition they would be afforded anonymity.

The minister continued: “There is nothing unconstitutional about that, that’s why we get real property tax paid by people in Nassau and not the Family Islands. You have examples of foreigners paying real property tax on undeveloped land, Bahamians don’t. There are many examples of variable approaches to taxation.

“Once you start going around the road about the high and mighty. They (web shop owners) happen to be black but imagine if this was a group of white powerful people that said this? People would be up in arms saying who are these people think they is!”

The minister continued: “Notwithstanding they have a lot of money, they are brash and arrogant. I don’t think they know who they dealing with.”

Another minister said: “I think they put a gun to the government’s head and they are saying it’s either our way or the highway. Any business establishment that does that, normally it doesn’t work. The government represents the people.

“Baha Mar’s former developer (Sarkis) Izmirlian said something to the PLP once and you see how that turned out,” the minister continued. “Perry went after them. This is a matter of sin taxes. There is a high tax on alcohol, high tax on tobacco and gambling.

“(The web shop operator) is very arrogant, he thinks because he has all these millions he can just tell the government what to do,” the minister added.

“Well I ain’t never get nothing from him and a sovereign government will never give away some basic obligations that they have to the people. I don’t care what court they go to, no court will ever rule in their favour.”

The Nassau Guardian’s editorial on Wednesday suggested web shop operators would form an alliance with the Progressive Liberal Party in a bid to oust the government – a theory that was condemned by the party’s chairman, Fred Mitchell, as “wrong and illogical.”

However, Cabinet ministers canvassed yesterday told The Tribune it was a likely development albeit not one that mattered much.

“They (web shops) probably will – so what?” said one minister.

“I think they dealt with the PLP using honey instead of a stick. Now they say ‘oh they contributed to the campaign.’”

The minister continued: “They did contribute to FNM campaigns, and to individual campaigns, so did hundreds of other people – that does not give you the right to dictate.

“I think they are overplaying their hand right now and it’s in part due to the arrogance of a few of them, probably led by one of them. All of a sudden, you’re a big star and you believe your s* don’t stink,” the minister said, “but all you are is a numbers boy. So stop.”