‘We won’t be bullied by webshops’

‘We Won’T Be Bullied By Web Shops’ 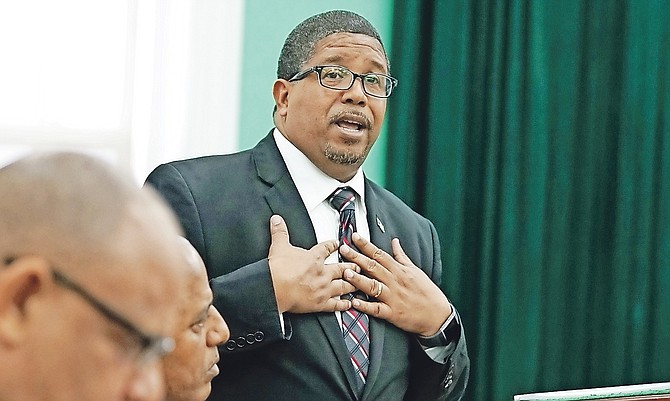 Deputy Prime Minister Peter Turnquest in the House of Assembly.

AS HE warned gaming house operators the Minnis administration will “dig up” any underground operations, Attorney General Carl Bethel said the government’s inalienable right to impose tax rates however it sees fit will be defended.

And in defending this right, Deputy Prime Minister Peter Turnquest insisted the government will not be bullied by threats of legal action from operators.

The Cabinet ministers pushed back yesterday on the heels of instructions from the Bahamas Gaming Operators Association to their attorney Wayne Munroe, QC, to take the government to court over the new proposed sliding tax scale.

Mr Munroe told The Tribune yesterday attorneys are preparing if and when “the trigger is pulled.”

This is the latest development as tensions persist between the government and operators since Mr Turnquest on May 30 announced increased taxes will be imposed on the industry. Government officials have maintained the scale is set in stone.

In an interview with reporters yesterday, Mr Bethel said numbers bosses simply do not want to pay the proposed higher taxes, despite being capable of doing so.

He said the group believes money gives them status and political clout, adding “hog know where to rub” and suggested they have a difficulty because the “special deal” cut from 2015, the year the industry was legalized by the Christie administration, had come to an end.

According to Mr Bethel the industry is undertaxed as he defended the move to bring the web shop business up to international industry standards.

“Mouth could say anything and people could put anything on paper,” Mr Bethel said yesterday in response to questions from the media regarding the BGOA’s threat of legal action.

“They say they gonna sue, we’ll see. If they sue they’ll be fought in court. If they go underground they’ll be dug up.

“We have a whole arsenal of new powers under the Proceeds of Crime Act to deal with persons who decide that they want to break the law so we’re not worried about whether they try and go underground, break the law or go to court.

“In any event we will defend the inalienable right of the government to determine through Parliament who bears taxation and for what reasons and what is necessary in the interest of the fiscal health of the country irrespective of persons.”

Asked whether the government was resolute on the rates of taxation of the proposed sliding scale, Mr Bethel said: “The government is resolute on its position that Parliament has the inalienable right to set tax rates and that what is passed in Parliament must be obeyed by all citizens and that those who seek to evade taxes will be dealt with according to law because it’s a criminal act, it’s an act of fraud for you to evade your taxes.

“But unfortunately, most of us don’t have the multi-millions of the numbers boys to hire high-priced consultants to make a major pitch on social media to be in the newspapers voicing our pain,” Mr Bethel also said.

“Well their pain in terms of paying taxes, it seems to me that they don’t even want to pay taxes that are established as benchmark levels in other countries.

“They want this special deal they got cut in 2015, well those days are over those days are over. Our tax rates have been benchmarked against what the standard rates of taxing of gaming in other jurisdictions both in this region and internationally.

“They just saying that they don’t want to pay it and they have the money and evidently money they believe gives them status. They believe money gives them political clout and we’ll find out but there is this old saying that ‘hog know where to rub.’ They don’t rub on the nail, they rub on the smooth board.”

When he spoke to the issue, Mr Turnquest said government officials have no difficulty meeting with gaming house operators.

He said Tourism Minister Dionisio D’Aguilar conducted a number of analysis studies, which compared other jurisdictions and their taxation levels.

He said: “We are at this point firm on our position with respect to the increase in the taxation. We believe that it is fair. There is a lot of misinformation that is going on out there with respect to how we are taxing and what we have contemplated.

“The reality is this is not a 50 percent tax as they are putting out there.

“This is in fact a very graduated tax that most of the industry will see no more than a nine percent increase in their taxation. There are a few big players that may see a bit more of a tax. But again, when you look at what this industry is taking from the communities that they operate in.

“You have to appreciate that there is an inequity in what has been allowed to happen from the beginning and so we are at this point and as I continue to say only trying to create equity in the system between the players the operators as well as the government because it cannot be right that seven operators benefit significantly to the expense of the government and the people.”

In response to claims the Bahamas could be blacklisted if operators revert to doing business underground, Mr Turnquest said the country has worked too hard to allow any group to engage in nefarious activity.

“We are not going to permit any kind of illegal activity in this jurisdiction. We have worked too hard to come this far to clear our names with respect to any kind of nefarious activity particularly as it relates to financial transactions to allow any group or any individual to circumvent the established regulations that we have in place,” Mr Turnquest said.

“It is important and I think it is an unfortunate situation that people would even suggest that they would take their business underground knowing the potential effect that it will have, not just on the government but on this whole entire country and what it represents to us in terms of the future of other activities that we are involved in, legitimate businesses that we are involved in and we are trying to promote as a jurisdiction,” Mr Turnquest said.