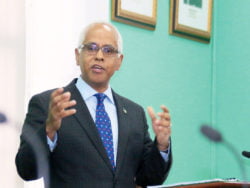 Web shop operators may have to endure “a year of famine” to find the industry’s taxation “sweet spot”, a Cabinet Minister yesterday urging: “Let the Bahamian people be the judge.”

Dionisio D’Aguilar, minister of tourism and aviation, called on the seven licensed web shop chains to publicly disclose their financial statements so persons can accurately judge whether the government’s proposed new tax structure is too harsh.

The Minister, who has responsibility for gaming regulation, told Tribune Business that web shop proprietors had enjoyed “many years of feast off the backs of the Bahamian people” while avoiding any sanction for operating illegal businesses prior to the industry’s 2014 “legalisation”.

He suggested that the sharp taxation increase was no justification for threatening to lay-off to 2,000 workers and close 192 web shop locations, pointing out that “legalisation” had created a much more significant consolidation through the reduction from 635 sites.

Mr D’Aguilar also argued that the domestic gaming industry’s response to the 2018-2019 budget was “counterproductive”, provoking the government to harden its stance against revising a structure that the sector claims will increase its taxation burden by between 238 per cent to 453 per cent.

He hinted, though, that the Government remained open to further discussions with the web shops before the new fiscal year’s July 1 start provided they eliminated the “vitriol” and “character assassinations” of ministers.

The Minister also revealed that the Minnis administration had modified its web shop taxation reforms following a pre-Budget meeting with one operator – believed to be Island Luck’s Sebas Bastian – although he declined to reveal the name.

“If they feel the gaming industry is being unfairly taxed, then meet with us and explain why,” Mr D’Aguilar challenged the web shops. “They should show and reveal all their financial statements.

“They should reveal to the public what revenues and profits they’re making, the taxes they’re paying, so people can see the impact on their financial statements. The question of whether it’s fair is subjective. Let the people determine whether it’s fair or not.

“There’s no doubt the Bahamas has been good to them. They were in business illegally, and none of them went to jail, none of them were ever charged. They’ve amassed significant wealth off the backs of the Bahamian people, and I just think their approach is a little harsh.”

Gaming is a highly-regulated activity worldwide, and the Bahamas is little different. The Government, via the Gaming Board, knows the financial performance of each web shop operator as they are required to file audited financial statements with the regulator to confirm due taxes and other fees have been paid. There is no present requirement, though, for web shops to publicly disclose their financial statements – as banks and trust companies, and insurance companies, must currently do.

The Minister then revealed that the Government met with one industry operator prior to the 2018-2018 Budget, although he did not indicate whether the full extent of the taxation overhaul was revealed.

“We did meet with one of the major operators prior to our plan. We did change some things based on what he said,” Mr D’Aguilar told Tribune Business. “I met with someone from the industry. We did discuss it, and did change it based on the discussion. We obviously didn’t change it in a manner they agreed with.”

He added that the nature of the domestic gaming sector’s post-Budget reaction had caused the Government to dig in its heels against any revisions to the tax hike, and suggested a change in approach – where the sector talked to the Government rather than shouted at it – might produce a more favourable reaction.

“Putting the pedal to the metal before all discussions are exhausted is counter-productive,” Mr D’Aguilar said. “They’ve [the web shops] come out the gate so vitriolic, so harsh, it’s causing a hardening of positions.

“It’s better if there’s dialogue and conversation. They need to talk to the Government. If you don’t agree with it it’s perfectly within your right, but you don’t have to launch these character assassinations of everybody. It’s counter-productive. It just causes an unfortunate situation. Everybody needs to calm down, everybody needs to get into a room. We’re all Bahamians at the end of the day.”

Mr D’Aguilar, having indicated on Monday that the Budget’s tax hikes were “set in stone”, yesterday appeared to leave the door ajar for further talks with the web shops. He hinted, though, that any reforms may have to wait until the 2019-2020 Budget, which would have the advantage of a year’s data on the tax change impact.

“They’ve had years of feast,” Mr D’Aguilar told Tribune Business of the web shops. “Maybe they have to have a year of famine, and then we review. I don’t think the Government right now wants to change their position, but who knows? Maybe after a year of data, analysis and what they say comes true, fine. Governments are constantly changing taxes.

“They have to recognise they’ve had many years of feast. If they have to have a year of famine to find the right [taxation] sweet spot, they don’t have to close locations and lay-off people. They think it’s in one spot, we think it’s much further away.

“The question is what is the level of taxation that should be applied to the gaming industry. We all agree it’s too little, they think it’s now too much. Let’s see where it settles.”

The web shop industry has itself conceded there is scope to increase its tax burden, though not to the extent the Government is seeking. Research conducted on behalf of the Bahamas Gaming Operators Association (BGOA) suggested that the global taxation standard lay between 15-20 per cent of gross gaming revenue.

The present tax structure requires web shop operators to pay 11 per cent on taxable revenue or 25 per cent of EBITDA (earnings before interest, taxation, depreciation or amortisation), whichever is greater, plus a 2 per cent contribution to community causes – equating to 13 per cent of gross gaming revenues.

“As the Bahamas Gaming Operators Association (BGOA) has consistently stated, we are not opposed to an increase in taxation,” the Association said yesterday. “However, an increase should be based on consultation, appropriate comparisons, empirical data and independent expert analysis that is specific to this gaming jurisdiction.”

However, under the Government’s proposed new ‘sliding scale’, web shops will pay:

And, in a nasty twist as far as web shop operators are concerned, the Government has also imposed new taxation on gamblers themselves rather than the sector. Patrons, from July 1, will have to pay a 5 per cent Stamp Tax on both their web shop deposits and non-online games/digital sales.