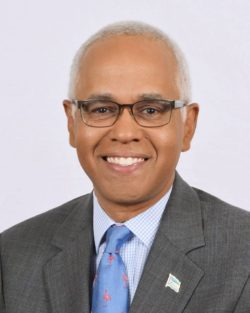 A Cabinet minister yesterday slammed Bet Vegas’s continued operation as “woefully unfair” to rival licensed web shops because it was creating “an anomaly in the market”.

Dionisio D’Aguilar, who has ministerial responsibility for gaming, told Tribune Business he found himself in rare agreement with the domestic gaming sector over that operator’s continued presence despite not being granted the necessary permits in 2015.

Bet Vegas initiated a Supreme Court challenge to its licence application’s rejection some three years ago, and Mr D’Aguilar said the judicial system needed “to opine quickly” on whether this action had merit to ensure an orderly domestic gaming market is maintained.

The web shop chain also obtained an injunction to prevent the Gaming Board from closing down its business, and the Minister of Tourism said he was constantly being advised that this was still in place to block any action by the industry regulator.

Emphasising that he holds “no opinion either way” on whether Bet Vegas should be licenced, Mr D’Aguilar said the ten-year bar imposed by the Christie administration on new web shop entrants was not necessarily an obstacle should the courts rule in the chain’s favour.

While the moratorium provides for eight licenced operators, the minister said one chain had since gone out of business, creating potential room for Bet Vegas.

Mr D’Aguilar also pledged to address legal loopholes that have rendered the Gaming Board impotent in dealing with unlicensed operators – and not just Bet Vegas. Tribune Business revealed last week that the Gaming Act only empowers the regulator to take action against licenced, not illegal, operators.

Disclosing that the matter will be discussed at Cabinet level, the Minister said Gaming Board chairman, Kenyatta Gibson, was especially “anxious” to address the regulator’s enforcement powers such that it did not have to rely on the Royal Bahamas Police Force (RBPF) to shut down rogue operators.

He described Bet Vegas as “the most clear example of avoiding the gaming laws”, while conceding that the chain’s Judicial Review and associated injunction meant the Gaming Board was powerless to intervene until the matter was settled.

“It is woefully unfair for them to be allowed to operate outside the confines of the law. I completely agree with the licensed operators that this is unfair and needs to be addressed,” Mr D’Aguilar told Tribune Business of the industry’s complaints over Bet Vegas.

“Bet Vegas has been involved in some legal action, and there’s been an injunction by the court to prevent the Gaming Board from shutting them down until the matter is adjudicated by the courts,” Mr D’Aguilar continued.

“I ask about it all the time, and I’m advised it’s still a matter before the courts and we are prevented from acting until the court has opined on this issue. No one has advised me to the contrary.”

They alleged that Bet Vegas, in particular, was expanding to eight locations with the pending opening of a new site in the Carmichael Road area in anticipation of enjoying a competitive advantage when the 5 percent levy on gambler deposits and over-the-counter lottery sales takes effect. That chain, and other unlicensed operators, will not have to impose this levy.

Mr D’Aguilar reiterated that it was “woefully unfair” for unlicensed operators to remain in business but “pay no taxes”, adding: “I can’t understand how this situation is allowed to exist.” He argued that Bet Vegas should pay the same gaming-specific taxes as its licensed rivals until a decision was reached in the court case.

“I hope they’re saving their taxes,” he told Tribune Business. “If they’re allowed to operate, we’ll go back for back taxes and collect them. I hope they’re setting the money aside. As time goes on, they’re owing more and more taxes.

“If they’re not entitled to a licence they’ll be shut down and put out of business. If they’re entitled to be licensed, fair enough. I have no opinion either way. The court needs to direct the Gaming Board how to move on this issue. Either way, they’re being held up.”

As a result, licensed operators believe their concerns that increased web shop taxation in the 2018-2019 Budget will create an expanded gaming “black market” are about to come true, taking the sector back to its pre-regulation days when it was viewed as “high risk” of being abused for money laundering and other financial crimes – thereby threatening the Bahamas’ international reputation.

Anthony Brown, Bet Vegas’s president, last week hit back angrily at criticism of his ongoing gaming operations, arguing that his business had been “wrongfully and illegally mistreated” over the rejection of its licence application back in 2015.

“Other operators should not be jittery about Bet Vegas. We have been the operation that was wrongfully and illegally mistreated since the process to regulate the industry started back in January 2015,” he slammed.

“While we were tied up in court, going back and forth, they were expanding. While our vendors were being threatened by the then-Gaming Board to end our service contracts, they were signing up exclusive contracts with those vendors.”

Mr Brown said he will continue to defend his reputation, adding: “Your name is all you have, and that is even more important when you do business elsewhere. I have been in the financial services industry for 12 years in the US. This whole saga has affected my livelihood. I’m not going to sit back and let my work be destroyed.”

He subsequently told Tribune Business that Bet Vegas’s systems were the first to be certified by Gaming Laboratories International (GLI), the independent tester used by Bahamian web shops, ahead of all other operators who were licensed by the Government.

Mr D’Aguilar, meanwhile, said the 10-year bar on new web shop industry entrants imposed by his predecessor, Obie Wilchcombe, was not necessarily an insurmountable obstacle for Bet Vegas should its court challenge prevail.

“I’m not that legally minded and would have to take advice on this, but they granted eight licences and there are only seven in operation. That allows room for one more,” he told Tribune Business. “We’ll address that issue once we get over that issue of whether they’re allowed to operate or not.”

The Minister acknowledged, though, that the Gaming Board’s enforcement powers needed to be enhanced, and promised action to achieve this.

“You’re absolutely right. The Gaming Board has no enforcement powers. It just has the right to bring those that fail to obey the gaming laws to the attention of the police,” Mr D’Aguilar admitted. “There’s no doubt that the inability of the Gaming Board to enforce the gaming rules is an issue.

“While I’m sure my Cabinet colleague, the Minister of National Security, will say to call the police and they’ll take care of it, the fact we don’t have a dedicated department or section in the police force to deal with it means the matter sits in the queue. The Gaming Board’s position is that they keep asking and nothing happens. What my ministerial colleague and I discussed at our level is we have to ensure that at a lower level it’s a reality.”

The Minister continued: “It’s probably more efficient for the Gaming Board to enforce its own rules, so I will be bringing it to the Cabinet and certainly discussing at that level whether to advocate a change.

“At the moment I’ve not done that but it will be addressed. We’ve been dealing with the tax increases primarily, but I know the chairman of the Gaming Board is anxious for us to address that issue.”