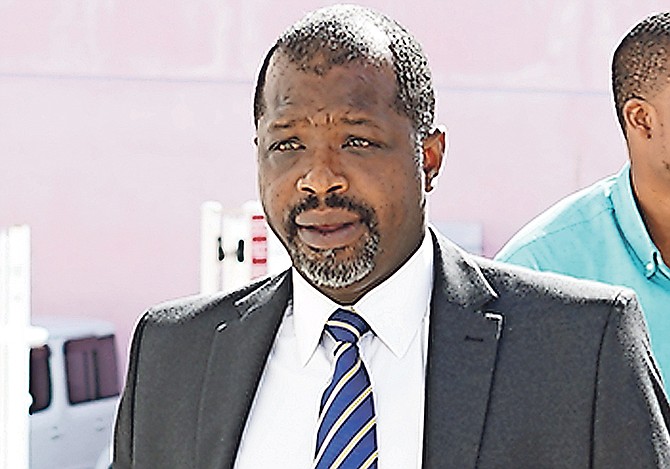 The Government narrowed its first quarter fiscal deficit by 52 percent despite missing out on a projected $12.6m revenue increase in web shop taxation, it was revealed yesterday.

“We were cognisant of that very early in the process, and managed our expenditure accordingly,” Mr Johnson told Tribune Business after the Ministry of Finance produced its first-ever “quarterly update” on the Government’s fiscal performance.

The “update”, covering the three months to end-September 2018, reveals that the Government could have further narrowed its $52m fiscal deficit to less than $40m if it had been able to collect on the anticipated web shop taxes.

“Gaming tax receipts of $6.2m tracked moderately below the $8.9m of the prior year, and excluded the potential uplift from the new schedule of taxes on gaming houses and the five percent stamp tax on patrons because of implementation delays,” the Ministry of Finance revealed.

“In combination, these new measures are budgeted to yield an incremental $4.2m monthly in receipts.” This means that the budget’s increased taxation for both web shop operators and their thousands of patrons is projected to yield an additional $12.6m every quarter, or $50.4m annually, in revenue for the Public Treasury.

This sum is not insignificant given the extent of the Government’s fiscal troubles, but the web shop industry has challenged both tax reforms impacting it in the Supreme Court, thereby delaying their implementation.

Wayne Munroe QC, the attorney representing the Island Game and Paradise Games web shop chains, told Tribune Business yesterday that the industry and the Government were currently exchanging proposals on rules for how the five percent stamp tax will be implemented in practice.

The Government has also issued regulations governing the “sliding scale” taxation structure imposed on web shops, which Mr Munroe branded as “constitutionally offensive”. He promised they would be challenged in the courts if the Minnis administration moved forward with their implementation.

Mr Munroe added that he was due to respond to the Government’s Stamp Tax proposals today, with fellow attorney, Alfred Sears QC, having already responded on behalf of Island Luck, the largest web shop operator, on Friday.

“On the Stamp Tax aspect, they sent us proposed rules,” he told Tribune Business. “It’s basically trying to work it out. My main issue with it is they want us to round up over 0.5, and to round down otherwise.”

The “rounding” issue has been one of the web shop industry’s primary concerns, as it could lead to an over or under-payment of the due Stamp Tax by patrons.

Neil Major, Island Luck’s chief compliance officer, warned in an August 16, 2018, letter to Mr Johnson: “No guidance has been giving on the rounding up or down of fractional cents, or if there would be variance based on type of transaction. With the number of transactions occurring, this has an impact on the financial results.

“Rounding of small amounts: We process tickets as small as $0.10. Rounding here could make this a 10 percent Stamp Tax on some customers.”

Mr. Munroe yesterday added that there were “one or two other technical issues” with the 5 percent Stamp Tax that he planned to take up with the Government on his clients’ behalf, and called on the administration to negotiate a solution with the web shop industry as opposed to engaging in a court battle.

“Hopefully we can deal with the Stamp Tax aspect,” he told Tribune Business. “On the ‘sliding scale’ tax aspect of it, they have put out new regulations we say are still offensive constitutionally, so we will be challenging those if they move forward with it.

“I’m hoping that when they write to us now they engage with is, so we can look at it properly, sit down and work things out. My clients are businessmen; they don’t want to be involved in litigation. Only attorneys win from litigation.”

Mr Munroe reiterated the web shop industry’s position that the Government should have properly consulted it on the 2018-2019 Budget’s tax changes prior to their passage through Parliament, thereby saving all parties time and costs.

“From where I stand it would be wholly proper if they engage the industry before they do these things, just like they do with the insurance industry, the banking industry and any other industry,” he added.

“We hope they deign to meet with us so we can have discussions. They may be surprised as to how helpful our clients instruct us to be.”