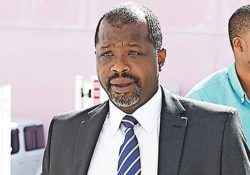 Web shop attorneys yesterday said the sector was stunned by the Government’s tabling of the five percent “patron tax” rules in Parliament given that the two sides remain far apart.

Wayne Munroe QC, who represents the Island Game and Paradise Games chains, told Tribune Business that the Minnis administration had moved ahead despite no progress having been made in resolving the domestic gaming industry’s major concerns.

He revealed that the latest rules did not address “rounding up or down” of fractional over-the-counter ticket sales, which the sector fears could spark lawsuits from over-taxed patrons while also resulting in it failing to collect the five percent stamp duty rate set by law.

Mr Munroe added that the Government had also failed to revise its position on requiring web shops to hire independent auditors to verify that the correct amount of patron tax has been collected and paid, branding this as “unnecessary” and an unwarranted extra expense for his clients.

With all web shops already subject to independent audits mandated by the Gaming Board, he argued that it made little sense for each operator to now be scrutinised by two different accounting firms.

The well-known QC said he now questioned whether the Government is acting “in good faith”, given that Wednesday’s rules tabling in Parliament took place before yesterday’s meeting with himself and Alfred Sears QC, who represents Island Luck.

That meeting has now been pushed back to 8.30am this coming Monday, and Mr Munroe said he was approaching it with “an open mind” in a bid to either “avoid” litigation or minimise the impact on his clients.

“I am taken aback by the tabling of what ought to be the product of the discussions before we had them,” he told Tribune Business, revealing he only became aware of the Stamp Gaming Patron Rules’ tabling through the media.

“We didn’t get to speak about it, but they tabled this thing in Parliament. I don’t understand the process. When you table it, are you saying this is my discussion? I don’t know if, when you talk to me now, whether you’re talking in good faith.”

Mr Munroe added that the latest “patron tax” rules submitted to the industry and its attorneys for review did little to nothing to resolve their main concerns, some of which web shops fear could leave them exposed to costly lawsuits.

“They had sent us a revised draft, but the only change I noticed was that, as I pointed out to them, they were calling it [the patron tax] Stamp Tax when the law called it Stamp Duty. They didn’t address the rounding up and down that creates the conflict,” he said.

Mr Munroe said requiring an independent auditor solely to verify compliance with the “patron tax” was “going to be costly” for the web shops, and was an expense that should be paid by the Government not the sector.

He argued that this should be redundant in any event, given that all web shops were mandated by the Gaming Board and the law to undergo external audits on an annual basis with the results submitted to the regulators. “Why should they have two independent auditors appointed by two different agencies?” Mr Munroe asked.

“The most important thing is the rounding up and down that makes it inconsistent with the Stamp Act. The more significant thing is telling me to round up and round down, as I will collect more or less tax than I should, and I can’t do that by law.

“If I buy a 10 cent number, 5 percent is half a cent, and rounding it up to a penny takes it to 10 percent of 10 cents. Round it down, and you collect less than you should. You can’t collect either less or more. We said to them [the Government] that nobody does these things,” he continued.

“I’d hoped to have some serious conversations with them to see why that can happen. They’ve tabled it, and either they have a serious explanation or you’ve left us looking for the court’s protection for our clients.

“Nothing stops a patron suing and saying: ‘You’ve collected more money from me than you should’… Our clients don’t want to be faced with patrons getting together, forming a class action, and and be made by the court to pay back more than the 5 percent that’s supposed to be collected.”

Mr Munroe reiterated that neither the Government, nor an individual minister, can tell the web shops to collect a tax amount – or rate – that is inconsistent with the laws passed by Parliament.

The Government and web shops have been at odds ever since the 2018-2019 Budget, and its new and increased taxes for the sector, were unveiled on May 30, 2018. The industry continues to argue it was denied due process, via a lack of proper consultation, over both the “sliding scale” taxation structure and the 5 percent “patron tax”.

The introduction of both taxes has been delayed, though, first by implementation challenges and then the Supreme Court action initiated by the web shops. The patron levy, in particular, meant that the industry needed to have all its games tested and re-certified by independent laboratories to verify that they performed as advertised – a process it says takes months, and was not anticipated by the Government.

The delay has already cost the Government between $8-$12.6m in revenue for the first quarter of its 2018-2019 fiscal year, although its recent Fiscal Strategy Report declined to adjust forecasts because its legal case is “on solid ground”.

The gaming sector – hotel casinos as well as web shops – forecast to generate $70m in revenue for the Public Treasury this fiscal year, having exceeded 2017-2018 estimates by 35.8 percent at $37.2m compared to initial projections of $27.4m.

The web shop industry, and its consultants, have argued that The Bahamas is unique in levying a tax directly on patrons as opposed to the gaming houses. However, the Government believes this is necessary to tackle the social ills caused by excessive gambling and help deter the industry’s growth.

Mr Munroe, meanwhile, blamed the Government’s failure to properly consult the web shop industry for the two sides’ dispute. And he questioned whether any good would come from Monday’s meeting, and if the two sides will be able to avoid litigation, given that the rules’ tabling seemed to signal the Minnis administration has determined its stance.

“I hope to have some of the answers to the questions on Monday,” he told Tribune Business, “but they are more or less going to be we’ve tabled this, so it sounds like a one-sides conversation.

“I live in hope. They can always recall a regulation or amend it. I’m going in on Monday with an open mind, and trying to avoid as far as possible any litigation or minimising what happens.”