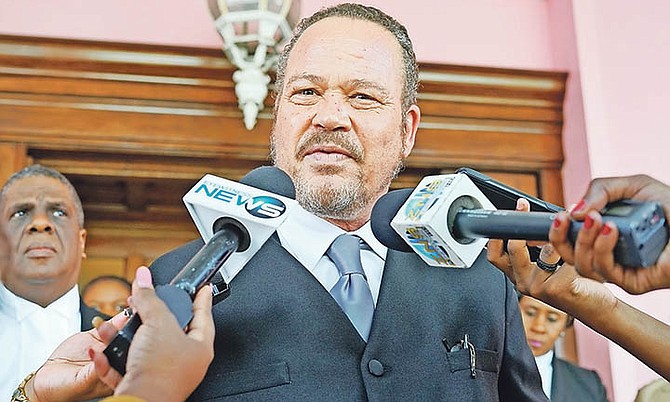 The Attorney General yesterday warned the web shop industry it was “time for lawful taxes to be collected”, and said of the Government’s stance: “We’re ready to go to war.”

Carl Bethel QC told Tribune Business that talks to resolve, or at least minimise, the dispute between the Government and web shops over the industry’s increased taxation had “turned out not to be effective”.

Confirming he had “rejected” what he described as a “counter-proposal” from Sebas Bastian’s Island Luck group and its attorney, Alfred Sears QC, the Attorney General said he was now awaiting a similar response from the web shops represented by Wayne Munroe QC.

Describing the submission from Mr Sears as “unacceptable”, Mr Bethel added that he had “seen nothing” to dissuade himself and the Government from the possibility that the dispute will ultimately have to be resolved by litigation in the Bahamian courts.

“I put a proposal to them. They were supposed to come back to me,” he revealed of the Government and industry’s latest discussions. “One of them did with a counter-proposal that was unacceptable. I’ve rejected what Mr Sears and his clients have to say.

“I’ve seen nothing to persuade us off the course of action that I indicated. We’re ready to go to war. I’m waiting for the other main lawyer [Mr Munroe] to send me their proposal, which they said they’d get to me by Friday.”

Mr Bethel added that the Government had been seeking to minimise the areas of dispute, and avoid litigation where possible, but this had yet to prove effective.

“That’s precisely our strategy,” he confirmed. “It’s turned out not to be effective, and it’s time for lawful revenue to be collected.”

Tribune Business previously reported that the Government and web shops had narrowed their differences/concerns over the five percent Stamp Duty levy to be imposed on gaming patrons, but were likely to need the courts to resolve the dispute over the “sliding scale” tax structure.

However, Mr Munroe, who represents the Paradise Games and Island Game chains, earlier argued that his clients believe no taxes are currently owed by any operator.

He based this on a combination of the Government repealing the old tax structure in the budget, but then failing to properly replace it because it used incorrect language to describe the basis for the “sliding scale” taxation structure.

While the Government has subsequently corrected this by tabling amendments to the Gaming Act’s regulations in the House of Assembly and Senate, these have not been given effect through an appearance in the Government’s Gazette. Mr Munroe also pointed out that taxes cannot be made retroactive to cover the five months already missed.

The well-known QC, in an interview with Tribune Business earlier this week, said the two sides were “still in talks” following a second meeting with the Attorney General that was held last month.

“I will be communicating our position as requested by the Attorney General and his technical team after taking instructions on Friday,” Mr Munroe revealed. “There had been some miscommunication. We felt they were supposed to send us something, and he did not recall it like that.

“We then had a frank discussion and undertook to send him a proposal. We will be meeting our clients this Friday to gain final instructions on the proposal to send to him.”

Mr Munroe said Mr Bethel had “never abandoned the Government’s position that it has the right to do what it’s doing”, with himself and his web shop clients opposing this and “looking at how to challenge this in the most efficient way” should litigation become necessary.

“We are looking at narrowing the disputes,” he added. “To be fair to him [Mr Bethel], he has drawn some red lines in the sand. We made some progress on the patron tax, but on the operator tax we’re still where we’re at.

“We say it is not legitimate for them to raise it; they say they can, so we’re looking at the best way forward on that.”

Mr Sears declined to comment when contacted by Tribune Business. However, sources familiar with the situation confirmed that Island Luck’s proposal had been submitted to Mr Bethel and it was now awaiting a response from his office.

The Government had previously pledged to clean up language and definitions relating to the five percent “patron tax”, and to address industry concerns over “rounding” that could result in web shops levying more than the due rate, thereby exposing them to patron lawsuits.

However, little to no progress has been made over the “sliding scale” taxation structure. The web shops’ case is based on what they allege is the lack of due process afforded to the industry over its introduction, and they view its new and increased rates as arbitrary, punitive and discriminatory.

Government missteps delayed the “sliding scale’s” implementation prior to the web shop industry launching its court challenge. The amendments which introduced it with May’s budget used “the wrong terminology” to describe what should be used as the basis for calculating the amount web shops must pay.

The definition originally employed could have been interpreted as meaning that the different sliding scale rates, from 20 percent up to 50 percent, should be applied to “all the money” that patrons pay.

It is supposed be based on that sum minus the winnings paid out by web shops, so the Government has now removed the term “revenue collected” from Regulation 57 and replaced it with “all taxable revenue”.

The dispute has already resulted in the Government missing its budgeted revenue projections from the gaming industry, with the loss pegged at between $8-$12m for the 2018-2019 fiscal year’s first quarter. This loss could now increase if a prolonged court battle results.

Meanwhile, the web shop industry and its consultants have argued that The Bahamas is unique in levying a tax directly on patrons as opposed to the gaming house operators. However, the Government believes this is necessary to tackle the social ills caused by excessive gambling and help deter the industry’s growth