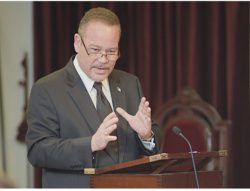 Attorney General Carl Bethel said yesterday that while the government continues to negotiate in good faith, it is preparing to deal with a no-compromise scenario with web shop operators over its tax scheme on the industry.

Bethel’s comments follow a statement from attorney Alfred Sears, who represents Playtech Systems (Island Luck), claiming that despite sending several settlement proposals to the attorney general, his team had not received any substantive response.

Sears, along with attorney Wayne Munroe, who represents three web shops, met with Bethel last year in an attempt to reach an agreement over the taxes.

Sears charged on Sunday that Bethel seems committed to deepening an “unfair and inequitable” tax regime against web shop operators.

However, Bethel insisted yesterday that is not so.

He said, “In the comments that Mr. Sears take issue with, I made it clear that we are still waiting to hear from Mr. Wayne Munroe’s side. It’s just that what Mr. Sears offered is unacceptable…I’m still, as I indicated, awaiting the position from Mr. Munroe. But in the event, we will have to make preparations to go to court if these discussions don’t go anywhere and I made that clear to them at the time we last met. We are well aware of our position on this matter.”

Bethel continued, “I’m waiting to hear from Mr. Munroe and then we will have further discussion when all the chips are there.

“But at the end of the day we have to make preparations to deal with the situation as it is if there is no acceptable ground of compromise.”

The operators filed an application in the Supreme Court seeking leave for judicial review of the both policies. They also sought an injunction against the taxes.

Following the application, the government agreed not to impose the taxes but rather seek to have further discussions with gaming house operators in a bid to iron out areas in dispute.

However, in an interview with The Tribune last week, Bethel reportedly said it is time for taxes to be collected from the industry, and the government is “ready to go to war”.

Munroe, who was also asked about the matter yesterday, said, “I have taken our clients instructions and I am finalizing our proposal to submit to the [attorney general]. I will then await the government’s response. To be clear, no one can dictate to the government over what policy it adopts. To also be clear, the government can only legislate within the parameters of the law, the supreme law being the Constitution of The Bahamas.

“Thus far, what I have experienced is the rough and tumble I would expect on a matter of national revenue implications for the government and important business viability for our clients.