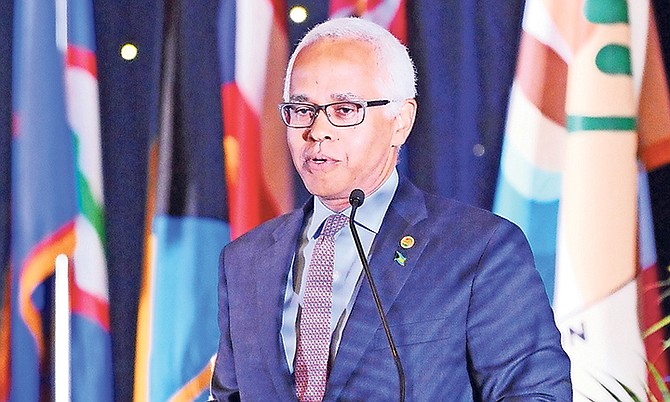 The Government has agreed to forego $25m in annual revenues to settle the taxation dispute with the web shop industry, a Cabinet minister revealed yesterday.

Dionisio D’Aguilar, who has responsibility for gaming, told Tribune Business that the Government was now projected to earn $50m per annum – rather than the initially forecast $75m – from a combination of the revised “sliding scale” tax on operators and the levy on patron winnings.

While this represented a one-third, or 33.33 percent, reduction from the 2018-2019 Budget’s target, the Government argued that it still represented a 127 percent increase in revenue generated by web shop taxation – thereby making for “an acceptable compromise”.

Mr D’Aguilar, speaking after the Government confirmed the settlement with the web shops, said the deal would enable the Public Treasury to claim “back taxes” to July 1 and have instant access to revenue rather than seeing an important income stream tied up in expensive and costly litigation.

From the web shop perspective, the agreement lowers the magnitude of increase in the sector’s taxation burden and reduces the “sliding scale” rates to the 15-20 percent range recommended by the industry’s own consultants.

As previously revealed by Tribune Business, the “sliding scale” tax structure is being cut from six bands to just two, with lower rates of 15 percent and 17.5 percent, respectively. Web shops will pay the lower rate on their first $24m of revenue, with the higher levy applying to anything above this figure.

This is to take effect retroactively from January 1, 2019, Besides promising greater simplicity and a lower tax burden, the revised “sliding scale” will only mean two web shops – one of which is Sebas Bastian’s Island Luck – will be caught by the higher rate. In total, the Government now expects to earn $35m annually – rather than the initial $50m – from this tax.

Likely just as important, the Government has also abandoned the 5 percent Stamp Duty levy on gamers’ deposits and over-the-counter lottery ticket purchases – the so-called “patron tax” – in favour of a “sliding scale” tax on their winnings.

The “winnings tax”, to be implemented from April 1, 2019, on lottery bets, will levy a five percent rate on winnings up to $1,000. Anything greater will attract a 7.5 percent rate, and the Government expects this to generate $15m as opposed to the initial “patron tax” forecast of $25m.

The Minnis administration added that no winnings tax will be levied on casino game winnings, and the web shop industry will doubtless be relieved that The Bahamas is not setting a global precedent by taxing patrons prior to consumption – as the initial proposal promised to do.

Explaining the rationale for the Government’s settlement with the sector, Mr D’Aguilar told Tribune Business: “The gaming industry had employed some leading attorneys [Wayne Munroe and Alfred Sears] to fight their case, and it became quickly apparent we would be wrapped up in expensive and lengthy litigation for a considerable period of time.

Asked by Tribune Business how much revenue the Government is giving up as part of the settlement, Mr D’Aguilar replied: “In the budget that was laid out at the beginning of the year, it was expected that the new gaming taxes would take effect from July 1.

“Fifty million dollars was expected from the “sliding scale”, and $25m from the patron tax. That’s what we projected. We had no idea about the patron tax; that was a best guess. There was no historical data to go on.

“As we rolled it out it became quickly apparent that the gaming industry was not as nimble as we thought, and it took time to adjust their computer systems to accommodate a sliding scale and accommodate a patron tax,” the Minster of Tourism and Aviation continued.

“The dates began to slip, and all the different gaming houses were at various states of ability to get that done. We didn’t realise that it took quite as long as it did. Then the litigation ensued and that slowed the process down even further.

“It was decided that we may have lost six months of what we planned to do, but let’s come to an agreement with the gaming houses, adjust the sliding scale accordingly, and let’s make it a winnings tax as opposed to a patron tax. Let’s get everyone on board and earn revenue for the Treasury.

“We expected the sliding scale to be $50m, and now expect it to be $35m. We expect the winnings tax to be $15m based on the projections from the gaming houses.” Part of the delay referred to by Mr D’Aguilar also stemmed from the need by the web shops to have their games recertified by independent testing laboratories as a result of the tax changes – a process that lasts months.

Mr D’Aguilar estimated this will generate around $11-$12m for the Treasury based on previous full-year collections of $21m, which is less than 50 percent of what the Ministry of Finance had projected to earn – $15m “sliding scale”, and $10m from the “patron tax” – during that period.

However, he argued that the Government will still achieve its twin main objectives – increasing revenues from a sector it felt was “undertaxed” and had the ability to pay much more, based on the multi-million dollar sums flowing through it, while also slowing the sector’s growth and potentially deterring Bahamians from unhealthy levels of gambling.

“We are doubling on an annual basis the taxes we’re realising from the industry because we felt it was under-taxed,” Mr D’Aguilar said. While the top benchmark for the lowest rate on the initial “sliding scale” was set at $20m, the revised version increases this to $24m.

When asked whether this was done to ensure most web shops fell entirely within the 15 percent bracket, the minister explained that $24m was an easier number to track in a 12-month year given that taxes were paid monthly. The previous $20m was “an odd number”, he added, while “looking at taxes on an annual basis was causing some consternation”.

“It’s a good compromise,” Mr D’Aguilar reiterated. “It’s livable. The Government achieves its goals, the gaming houses reluctantly agreed to it. It took us six months longer than we thought, but have finally reached where we want to be.”

The settlement, and the Government’s position, has shifted much closer to that taken by the web shop industry in the immediate aftermath of the 2018-2019 Budget’s unveiling, as the operator tax rates fall into the 15-20 percent range that the sector’s consultants argue represents the global gaming average.

The simplified structure’s 15 percent and 17.5 percent rates are also much lower than those unveiled last May. Under that structure, web shops were to pay on each portion of their revenue:

The Government, in its statement yesterday, argued: “The new gaming tax structure represents a 127 percent increase in taxes on gaming operators, securing just under $50m in total revenue, compared to $2m in 2017.

“All back taxes will be collected before the end of this budget year at the previous 11 percent rate. The Government had two objectives going into the most recent round of negotiations: To ensure the industry pays its fair share of taxes, and to end the deadlock between the Government and the gaming industry.

“This is about what is best for the Bahamian people, and securing a deal will mean more funding to support much needed programs and better services for Bahamians.”