Island Luck ‘Back To Business’; Deal May Trouble Rivals 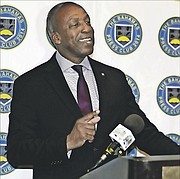 Island Luck’s attorney says his client plans to “get back to business” following the tax settlement with the government, while conceding the deal “may create a problem” for other web shops.

Alfred Sears QC, who represented Sebas Bastian’s chain in the legal action and subsequent negotiations, said the eight month stand-off between the industry and the Minnis administration had exposed the need for “a more practical approach” to tax reforms.

He told Tribune Business that such changes needed to strike a balance between “the needs of the state” and ensuring affected industries remained “sustainable”, and be fair, “proportionate and progressive” for all parties.

Mr Sears said the past half-year’s uncertainty, following the new and substantially increased tax burden’s unveiling in the 2018-2019 Budget, had caused his client and others to “retrench” and hold-off on further job-creating expansions and gaming innovation.

While the settlement will bring “stability” back to the web shop industry, Mr Sears also hinted that the Government’s tax treatment of domestic gaming contrasted sharply – and unfavourably – with the numerous tax breaks, incentives and subsidies granted to the foreign-owned hotel casinos.

Referring to Island Luck’s parent company, the former attorney general said of last week’s deal: “It is an accommodation made between our clients, Playtech Systems, and the Government. The client has agreed to the agreement.

“But it is incumbent on me to say there needs to be a more practical approach to the tax regime in The Bahamas based on proper empirical research and advice, and the principal of fairness and proportionality.

“When you’re dealing with tax policy it should always be guided by balancing the requirements of the state with ensuring the sustainability of the industry and, most significantly, proportionality, treating like organisations the same and making sure you are also progressive.”

Mr Sears said a progressive system, where tax levies are linked to ability to pay, would ensure “the burden is proportionately shared across the society. He added: “You cannot have a situation where entire segments of the same sector are treated disproportionately or one better than the other.”

As for the taxation dispute’s impact on his client and the wider sector, the former attorney general told Tribune Business: “You want there to be stability so the enterprise can go out and grow their business, and grow the economy of the country, but when you have measures not supported by empirical evidence then it creates periods of uncertainty.

“Where you have uncertainty there is retrenchment or contraction of business. People don’t expand when there’s uncertainty, and a lack of clarity about public policy and legislative changes. Certainly, for our client [Island Luck], they will now continue to innovate and improve the efficiency of their business to be as competitive as possible.

“It is the intention of our client to get back to business and continue to be innovative, efficient and productive, and continue to make a contribution as a corporate citizen within the country.”

Mr Sears conceded, though, that the agreement with the Government “will create some uncertainty for some of the smaller operators”. He added: “That’s likely to happen. It may create a problem for some operators.”

His comments support this newspaper’s understanding that not all web shops are thrilled about the settlement given the implications it may have for the financial health of their operations.

Tribune Business’s analysis of the deal suggests that the prime beneficiaries are Mr Bastian and Island Luck, as the largest web shop chain and market leader, and the Government. Those likely to fare less well are the smaller web shop chains.

This is because Island Luck, as shown by research from Christiansen Capital Advisors, the web shop industry’s own consultants, was virtually the only operator exposed to the higher tax rates under the Government’s original “sliding scale” taxation structure.

It was the sole web shop chain exposed to rates ranging from 30 percent to 50 percent on its gross gaming revenues, whereas five of the remaining six operators would only have faced the lowest 20 percent rate. Chances was the only chain, apart from Island Luck, which would have seen a 25 percent rate levied on a miniscule portion of its revenue.

The Government last week said the agreement with web shop operators would reduce its projected take from the “sliding scale” by $15m annually – from the initially projected $50m to $35m – as a result of shrinking the six rates to just two, lower levies of 15 percent and 17.5 percent, respectively.

While the bulk of Island Luck’s revenues will be taxed at 17.5 percent, this is much lower than the rates originally proposed in the 2018-2019 Budget. As a result, it seems likely that much of the $15m revenue reduction will accrue to this web shop.

While its six rivals will largely only attract the lower 15 percent rate, this still represents a 36.3 percent – or more than one-third increase – upon the 11 percent rate they were originally paying. And the five percentage point reduction in the originally proposed 20 percent rate means they will likely see fewer benefits than Island Luck.

It is also unclear whether the settlement deal will be enough to stave off the downsizings, store closures and job losses that the web shops threatened last June. While Island Luck is highly unlikely to go through with the 350 lay-offs it threatened, A Sure Win had warned of 11 store closures and 50 redundancies, while Paradise Games also told staff to prepare for the worst.

Dionisio D’Aguilar, the minister responsible for gaming, last summer argued that the restructured and increased taxation was likely to accelerate web shop industry consolidation that was already being driven by technology and competition.

“There are three of the seven gaming houses that are either too small or have been increasingly losing market share over the past three years that, unless something dramatic occurs, I expect them to begin to close locations,” Mr D’Aguilar said in his 2018-2019 Budget communication.

Last week’s deal also largely allows the Government to save face, and present a convincing argument to the Bahamian people that it has not totally caved in to the web shop industry’s demands – a charge that some observers were making in the wake of last week’s agreement.

Still, where the Government and web shops have ended up is almost exactly where the gaming industry’s own consultants suggested last June. Gavin Hamilton’s report argued that international evidence and research showed “that the optimal tax rate should be between 15-20 percent” – exactly where the two sides have settled.

Yet the Government, as it did, is still able to point to a 127 percent increase in the web shop industry’s tax burden, which it says will rise from $21-$22m per annum to the new $50m per annum. That is still a one-third, or $25m, reduction on the Budget’s forecast $75m revenue increase.

The $50m and $75m figures also include revenues generated by taxing web shop patrons. This has been switched to a “winnings” tax as opposed to the original levy on deposits and over-the-counter lottery ticket sales.