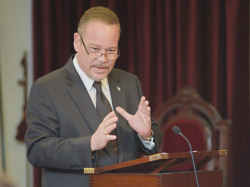 Attorney General Carl Bethel said yesterday that amendments to the Gaming Act will strengthen the powers of the Gaming Board to ensure that the laws of the country are followed and address the issue of what he called “midnight cowboys”.

The Gaming (Amendment) Bill, 2019 was unanimously passed in the Senate yesterday.

“Because of the imposition of

taxation, it is felt by everybody looking at this matter that people would try to run, and there are some midnight cowboys out there who offer numbers placements using their telephones and placing these bets over the internet,” he said.

“And so it was deemed to be necessary for that and for other reasons for the Gaming Board to be given power, creative powers, to regulate the gaming industry.”

Bethel said the Gaming Board has authority only over licensed gaming houses. However, the new amendments give the board authority over all gaming operations, licensed or unlicensed.

“There is one gaming house that is unlicensed that sued the government that obtained an injunction and for one reason or another, the matter has not been able to progress, largely because the principal owner of that gaming house had a serious illness, and so that has held matters up from further progress at this time,” he said.

“But the problem is they have, I think, at least 11 gaming houses that are in full operation. So it’s a blatant disregard for the law. So we’re hoping that the principal owner would have a speedy recovery so that we can have meaningful engagement with him.

“There are processes whereby he can legalize his operations, so we’ll see. If not, the Gaming Board will have the authority to have the injunction discharged and take further steps to ensure that the gaming laws in the Commonwealth of The Bahamas are followed.”

The passage of the bill came only four days after it was passed in the House of Assembly. In addition to broadening the authority of the Gaming Board, the bill also implements a new tax structure.

Last May, the government announced a sliding scale tax on gaming house revenues and a five percent stamp tax on deposits.

However, web shop operators labeled the taxes discriminatory, unfair and wrong and claimed the increase in taxes would cause them to lose business.

Legal action from gaming operators forced the government to come up with an alternative tax structure.

“The Gaming Amendment Bill represents a negotiated resolution to the actions which attended the attempts of the government in 2018 to reform the basis on which gaming houses are taxed,” Bethel said.